Friar’s Walk, Reading, used to be a shopping mall. Harassed mothers would do their last minute Christmas shopping there, nervous graduates would shop around for their first Interview Suit, teenagers would shoplift from the Claire’s Accessories. Not anymore though. Now there is no Claire’s Accessories.
Because in Friar’s Walk, everybody died. Usually more than once. Now it is a dark place, a quiet place, a graveyard of empty shop fronts, disused kitchenettes, and a tragically unused jungle gym.
But as you stand there, in the dark, if you listen carefully you can hear whispers. Because is Friar’s Walk the walls tell stories.
Stories about the massive Zombie LARP game that went on there last weekend.
These are those stories.
Long-time readers will have already read about my last Zombie LARP adventure. There was one survivor.
This time around, most of the team was reunited. Myself, Alina Sandu and Matt Barnes were ready for action with a couple of important additions- One, Tom Harvey, Hello Bear bassist and our blog’s absolute favourite buttmonkey joined the team, as I felt it was important to have a red shirt character we could kill off easily and without remorse.
Secondly, and somewhat more impressively, we had Ninjas.
Our team was assigned the moniker 2B, so we hilariously always referred to ourselves as Team 2B or Not 2B, because I insisted on it and never, ever got tired of that joke. I still haven’t.
The following game featured four hour-long runs. The rules were simple- Find eight batteries, plug them into the radio, then run for the roof where the “helicopter” would come and rescue us. Each run would begin with a quarter of the players as slow moving Romero zombies, and the rest as survivors. Personally, I thought this was stupid. One of the little suspension-of-disbelief tricks we always pull watching zombie movies, is accepting that groaning, slow-moving corpses are only that deadly in large numbers. Clearly a minority of these against an intelligent, fast moving and organised majority of humans would be quickly wiped out.
Run One
Our team was murdered pretty much instantly. I died screaming in the jungle gym.
This was a common story, but the human spirit prevails, and other teams fared better than hours, as survivor Anthony White’s video testimony proves:
Zombie LARP - Station Zero from Antony White on Vimeo.


Against adversity, the humans were able to unite, make a brave stand and escape, even though our team was completely... wait a second. What’s this?
There, looking extremely cheerful considering that all his friends are dead, is Hello Bear bassist and blog buttmonkey Tom Harvey, right there among the people who made it out.
Outraged, I tracked down Tom Harvey, and made him account for his actions. His words, if you can believe them, are printed right here:

I soon found myself alone and bewildered, with no ammunition. Time passed, and the zombie hordes grew considerably. I was aimlessly wandering about, attempting to find other survivors, and to assist in collecting the precious batteries. I had been imformed that only one more was required in order to summon the helicopter. I casually strolled into a large room across from the childrens play area, and straight into the eyeline of a prowling white knight. This was not good. I had no ammunition, and no backup.


Okay, for those of you who don’t know, a White Knight is a cross between Rorschach from Watchmen, and Jack Nicholson’s character in The Shining.
So ensued a small game of cat and mouse around the pillars. However, the white knight allowed me just enough time to sprint away, and to safety. Unfortunately, in my haste, I ran straight into a large puddle of water. Suddenly I was running without having any forward acceleration whatsoever. The White Knight was metres away from me when I somehow managed to find some purchase, the shock of which caused me to stumble. Using my now useless gun to steady myself, I ran to safety, at least, for the time being.


The time following this terrifying incident is mainly blurry, but I imagine it mainly involved cowering and whimpering. My memory kicks in back in that same room, this time escaping a large horde of the undead. For reasons unknown, I stopped in my tracks for the briefest of moments, which allowed me to spot and collect the final battery. This was brilliant, I had a chance of surviving! Oh wait, there's a fuck tonne of zombies bearing down on me....forgot about that. My days were surely numbered, there was no escape. 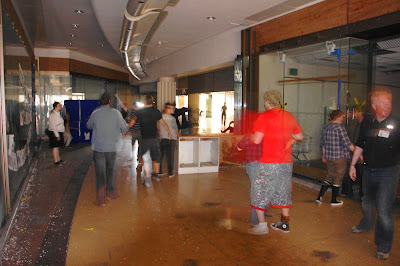 However, my knight in shining armour arrived, in the form of a skull adorned ninja. We were being backed into a corner, but the opportuniy to escape somehow arose - a gap had formed, I merely had to make a break for it. It was then that I bravely ran away, leaving my ninja companion to distract the zombies long enough for me to safely navigate my way out and into the dark stairwell. I would like to say that this was pre-agreed with my stealthy ally. In reality, I believe the conversation was somewhere along the lines of "Sorry mate, I'm gonna have to leg it.....good luck". Unfortunately, he did not survive, but I did, so all was well with the world. My next aim was to safely return the battery to the saferoom....but where the fuck was I?


So this was when things started to fall apart. Quickly, we realised our weapons were occasionally a bit more jammed than we’d like, and we were being completely outnumbered. I found our brave, skull-faced leader on the floor and ran over to heal him, only to turn round in time to see a White Knight bearing down on me with an axe.
Still somehow the team carried on without me. Darth Vader was somehow still alive.
Testimony from Darth Vader
Ahead, crouched by a pillar, I saw our leader. Armour still on, still armed, very still. I retreated back crouched down next to him, and asked "How'd you get through that?"
He turned slowly, and reached out towards me, groaning like the last escaping air of a corpse.
Sword across his chest, I forced him back across the floor and over (figuratively) the safety rail, but not before he'd swiped at my chest. I turned and ran, and ran, and ran, pumping a rifle I had no idea if worked, and swinging a sword at anything that moved. I got slashed at on the ribs, but momentum and a goal ahead of me kept me going...  An arm that I thought was going to swing just under me as I leapt suddenly shot up. With my armour gone, and nothing but momentum carrying me on bones that may have shattered, not thinking about the weapons, just managing the pain, and knowing, KNOWING the safe room was around the next corner... I ran.
Straight into practically every zombie in the field.
So, once more, the last remaining member of our team was Matt Barnes- who makes a habit of this sort of thing.
Testimony from Matt Barnes
I hung around in the safe room for a bit as it became apparent that not only was I now unarmed, but there were a quite terrifying number of "ambulant cadavers" outside each entrance. In the end all the survivors got together to make one final daring break for freedom (or "suicide run" as it might more accurately be termed). Most of us actually got quite a long way towards the other side of the mall before being brutally torn down by an assortment of zombies, White Knights, and one inexplicable mad woman with a shotgun.
The last I saw of Matt he was lying in a shop window, wounded, but not dead.
So I ate him.
Thanks to Alina Sandu and www.blackpapersky.co.uk's Anthony White for letting me use their pics and video footage for this blog.
Posted by Chrisfarnell at 11:03