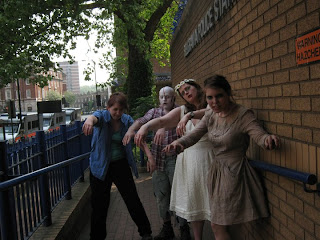 In the Guardian today our good friend Hannah is writing about the high court decision that it was legal to lock her up for dressing like a zombie on the royal wedding day. She was kind enough to give this blog a shout out, mainly because, well, her being there was my fault. She wasn't there for political or activist reasons, she was there because I thought it would make for a funny blog post that would get a few hits, but couldn't make it down there myself. This is something Hannah may never let me live down.

So, in anticipation of a bunch of people clicking through to here from Comment is Free who aren't interested in hearing what I have to say about zombie movies (that's a lot) I'm posting all the relevant Royal Wedding stuff here.

First, our blogs original royal wedding write up, including Hannah's original account of the arrests.
Secondly, a piece by Amy Cutler, a friend I sent along with Hannah who also got arrested. Amy's talking about how zombie films actually have a whole lot to say about situations like this.

And finally, here's a New Year's Eve interview with Hannah following her awarding of Zombie of the Year by the Zombie Rights Campaign.

It's also worth checking out Hannah's own blog as well as the website she set up to collect all the information relating to this case, Pageantry and Precrime.

Have a look around, and be careful what you're seen wearing during the Olympics.
Posted by Chrisfarnell at 07:51 No comments:

#45 The Divide: The Dark Heart of Man is Dull

The genre this blog chose to focus on is not a cheery place. In every story we cover it is presupposed that you, and everybody you love have died, probably screaming. More than that though, these stories do not bring out the best in human nature. From Night of the Living Dead onwards we have seen time and time again that if you put a bunch of people together in a room and then kill everybody else, it’s only a matter of time before they turn on each other.

So, here we come to The Divide. Oh, and just so you know, I’m going to spoil the shit out of this movie. Also, spoilers, this is one of this blog’s rare negative reviews, so if you dislike ranting, scorn and mockery, why not read what I have to say about Juan of the Dead instead? That was good! Likewise, this film had some rape in, and we talk a little about that, so you may want to avoid this review for that reasons.

The Divide sets itself up as Lord of the Flies, only with a nuclear bunker instead of a desert island, and a group of supposedly competent adults instead of school children. It’s a harsh, bleak look at the darkness that lurks in the hearts of men.

But The Divide makes a crucial, fatal mistake.

Apocalypse fiction, more than perhaps any other part of sci-fi, works by making you ask yourself what you would do in that situation. Sometimes it answers that question with a badass power fantasy ala Shaun of the Dead. Sometimes it makes it clear that you would lead a short, painful existence than die, ala Threads. And sometimes it goes the Lord of the Flies route and suggests that you would become a homicidal arsehole. The Death of Grass is perhaps the best example of this.

But for this to work you’ve got to start off with a character who can identify with. In Lord of the Flies, the progression from school boy to painted savage is a gradual one, made up of a series of logical steps. That’s why it’s scary. In Night of the Living Dead, Ben seems like a level headed guy, and while Harry comes across as a bit of a jerk, he’s the sort of jerk you can imagine running into at work or moving into the house next door.
In The Divide, within ten minutes of watching the film you’ve established that you are in the presence of a shower of dicks. Not a single one of the characters ever demonstrates a likeable quality or warm feeling towards another human being, with the exception of the mother towards Stock Cute Child no #3, who is thankfully kidnapped by mysterious soldiers in hazard suits within the first act of the film.

Despite this, the brunette who doesn’t have sex with anybody is apparently supposed to be our viewpoint character, because, despite the efforts of countless postmodern, meta-commentary jokes in horror films over the last two decades, this film still insists on killing the black guy first, punishing the woman who enjoys sex (with rape! Classy!) and letting the virginal girl escape.
I was watching the film with Friend of the Blog, Alina and we quickly decided the film was much more fun (and made just as much sense) if you decided the film was taking place in real time. The character’s decisions make just as much sense. At an arbitrary point in the film two of the characters just decide “Hey? Shall we be rapists now? I feel like maybe my character should be a rapist.” “Me too. But I want to do it wearing this woman’s nighty, and to try to rape that other guy, while you’re attacking his girlfriend. That way this will come across as a sort of gritty reboot of The Rocky Horror Picture Show, which I think is what we’re going for now.”

Finally, I don’t want this review to be entirely negative, so if you do want to watch a story where people attempting to save themselves in a bomb shelter find their worse natures brought to the surface by crisis, I heartily recommend these two stories that are both better, more emotionally involving, and, perhaps most importantly, 87 minutes shorter.

So, watch either The Shelter, an episode of the Twilight Zone that dwells on the way civilised people can turn to animals when their lives are on the line, or Bart’s Comet, from The Simpsons, which does the same thing. Both are better than this. 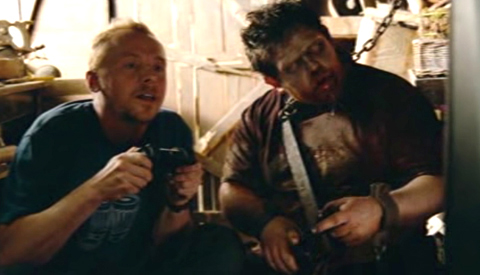 Anniversary Dinner - Official Trailer from gotta/enk on Vimeo.
Posted by Chrisfarnell at 06:28 No comments: