You know what I really love? Intelligent protagonists. Not genius protagonists – your Sherlocks or Greg Houses or Lord forgive me, Doctors who solve the entire plot the instant somebody says something by chance that’s a convoluted metaphor for the actual solution to a mystery.

Then of course there’s your Harry Potter style protagonist, who doesn’t solve any problems or mysteries as much as follow a series of carefully laid out breadcrumbs and coincidences while being ever-so-brave the whole time and, despite being basically a child, constantly being put in situations of near-fatal danger by supposedly responsible adults.

Anyone who knows me knows that I devoured the Harry Potter books, loved (most) of House right until the end and am eagerly awaiting the next episodes of Sherlock and Doctor Who, I love all of the examples I just gave, but it’s very rare even among these favourite things of mine that you find a properly intelligent protagonist. One who isn’t a magical genius, but isn’t oblivious to the plot twist the readers saw broadcast three chapters ago.

This is what makes Katya’s World, which comes out at the start of November, special. Jonathan L Howard has, in Katya Kuriakova, created that most difficult of things, the intelligent teenage action hero. You might disagree if you’re much smarter than I am, but throughout Katya’s World I kept seeing Katya figure out the next twist in the tale always a page or two ahead of me (and occasionally a page or two afterwards). Howard doesn’t cheat- Katya doesn’t work things out because she’s been gifted some knowledge that the writer refuses to share with you for dramatic tension, she has the same clues you do and she shows her working and when she tells you the answer you immediately see how you should have figured it out first, only you didn’t did you?

Katya’s World is Russalka, a human colony on a planet filled with valuable minerals and resources, but no landmasses above water. The cities are networks of tunnels and caves that have been drained of water, the primary method of transport is the submarine.

Before we go any further can I just say, why isn’t Submarine Opera a thing? Katya’s world is a great example of the awesome potential of the genre, and completely puts the only other examples I can think of, SeaQuest DSV, Voyage to the Bottom of the Sea, Stringray and recent Beeb series The Deep completely to shame. Where the best of those examples (and I know I’m risking pissing off a lot of Roy Scheider fans here) manage to achieve the feel of a slightly damper version of TNG, Katya’s World creates a claustrophobic world where the weight of the water outside is constantly weighing down on you and your best method of finding out about the dangers beyond your submarine amount to listening really hard.

In a world like this is not hard to see why Katya, at the age of not-quite-16, would be expected to shoulder near adult responsibility, and while there is a certain amount of the common YA trope of the one teenage character being constantly manoeuvred into the centre of the action it’s not hard to see why the adults around her believe she’s capable of dealing with the dangers that they face.
Posted by Chrisfarnell at 02:02 No comments:

#48 Play Dead: The Most Adorable Zombie Movie Ever

It’s time I admitted it. If you set yourself the challenge of updating a blog that is mostly about zombie movies on a semi-regular basis, after about 20 months you can start to feel like you’ve had your fill.


Zombie movies, after all, all follow very similar structures. Hell, that’s part of the reason why I chose zombie movies in the first place, because by seeing the same story done over and over again in dozens of different ways, you can hopefully reveal some interesting things about storytelling.

But still, even then you can sometimes feel like you’ve seen every twist, every variation, ever meta-post-ironic-reconstructed-deconstruction. Then something like Play Dead comes along and shows there are still fresh, new and exciting things to be done with the genre.


It’s a zombie movie, but dogs! Look at the cute little doggie woggies! With their little noses and their wagging tails!

Okay, full disclosure. In the same period during which I have been testing the very limits of my zombie-movie-watching capacity I have also reluctantly been drawn over to the side of the dog lovers. A client whose house I work at regularly has a couple of really stupid dogs, and they keep looking at me with their big wet eyes and wagging their tales and jumping up to say hello and I’M NOT MADE OF STONE!

I mean look at him!

I haven’t even asked the client for permission to nick this photo from his Facebook account, on the grounds that he loves looking at pictures of his dogs so much he’ll see it as a pleasant surprise that one has suddenly turned up on a website he’s reading.

But enough looking at that dog’s stupid cute face. We’re here to review a zombie movie and review a zombie movie we shall. Minor spoilers from here on in (although really, the entire movie is right up there and takes slightly less time to watch than an episode of The Simpsons, so I don’t know why you don’t watch that first).

Play Dead is a short film funded through a Kickstarter page last year and made on a budget of less than £6,000, which even George Romero would probably have a good giggle over. The Kickstarter page describes the movie as “Homeward Bound meets a zombie apocalypse” and it doesn’t disappoint, although there’s no talking, weirdly anthropomorphised animals here. These dogs are dogs, pure and simple. The dog’s personalities are communicated partly through introductory freeze frame captions when each dog appears, and partly through... dog... acting... ? Is that a real thing? 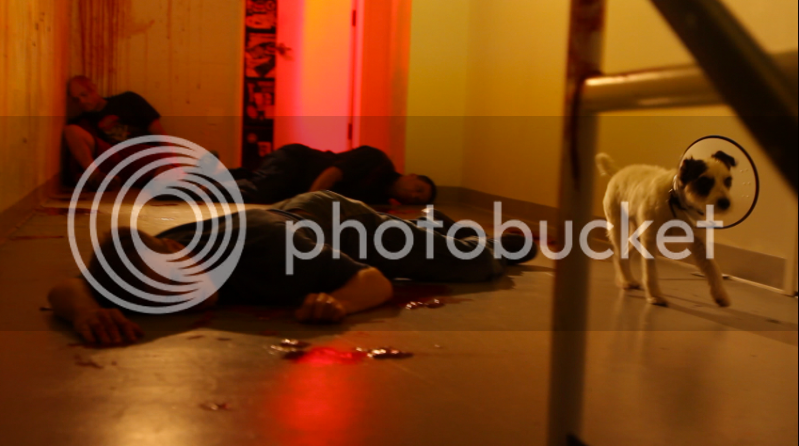 The usual tropes you’ll find in a zombie movie are here, with a doggie twist. The disparate characters from different backgrounds forced to work together by circumstance? Check. The human settlement that looks like it’ll provide sanctuary but actually turns out to be more dangerous than the zombies? Check. The long trek through the apocalyptic wasteland to find a destination where safety and supplies are plentiful? Check. The shocking twist at the end where it turns out the sanctuary is taken over by vicious, flesh eating killing machines? Check and check.

However, perhaps the people who’ll find this film most disturbing are dog owners themselves. Not because we see horrible things happen to the dogs (although we do) but because of the other zombie movie trope this movie embraces.

See, as I’ve talked about before, one of the things about the zombie apocalypse is that it’s a fantasy. It’s a fantasy of waking up one day to discover the rules and restrictions that are holding you down the rest of the time have suddenly disappeared, and now you can go running around shopping malls stealing everything you like and hitting people in the face with cricket bats.

It’s something we’ve seen pass into Young Adult fiction as well, with books like Charlie Higson’s The Enemy and Alexander Gordon Smith’s The Fury showing kids scenes of sheer horror back to back with appealing fantasies about what life would be like with all these grown-ups all over the place.

And so with Play Dead “law and order” or “grown-ups” are replaced with, well, you, dog owners. Play Dead is a dog’s wish-fulfilment fantasy about just how great life would be if you were dead. One of the dogs even drags her zombified owner around on a leash.

Still, look how cute the doggies are!
Posted by Chrisfarnell at 13:18 No comments: