The Next Big Thing

A slight shift from business as usual as this week we're taking part in The Next Big Thing. It's sort of like one of those annoying Facebook chain questionnaires, except instead of Facebook it's people's blogs, and instead of all those really dull people you know, it's authors, so, y'know, it's cool.

I was very kindly tagged in by Kim Curran, author of the real-life-save-game-function novel, Shift. Once I'm done here I'll be tagging the next bunch of writers who'll keep the chain going. But first, here's some shameless plugging for my cloning novel, Mark II. 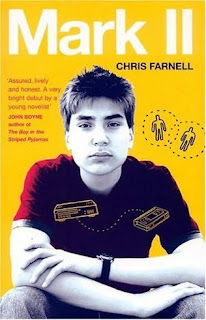 What is the working title of your book?
Mark II

Where did the idea come from for the book?
From TV. I was watching a documentary about cloning, and one of the people interviewed was a parent who wanted to clone their terminally ill child. It got me thinking about what the clone would think about this. I started off trying to write a short story about a clone who was brought about in this way, but it sort of expanded into a novel.

Which actors would you choose to play your characters in a movie rendition?
This is always difficult when all the interesting people in your cast are children, as all the actors who could possibly play the part have this horrible habit of growing up. My current favourite for the role of Mark Self and his clone is David Rawle from the Chris O'Dowd sitcom Moone Boy. He can pull off two most important things about Mark- a look of wide eyed innocence and look that looks a lot like wide eyed innocence but really, really isn't.

Oh, and the theme tune has to be this.

What is the one-sentence synopsis of your book?
Phil's best friend Mark dies after a long illness, only to be replaced by a clone who looks like, sounds like and has some of the memories of his old best friend, but is a new person altogether.

What other books would you compare this story to within your genre?
A lot of people have compared with Mark Haddon's The Curious Incident of the Dog in the Night Time, I think mainly because it has a child narrator with an unusual perspective who doesn't quite get the "rules" of everyday human interaction. I like to think of it as Frankenstein, if the monster had found some people who actually liked him.

Who or What inspired you to write this book?
It started off being about playing with an idea that seemed like a very possible real world application of cloning technology. I fudged the science and made my clone vat-grown and speedily aged up because I didn't really want to write about a newborn baby, but I really liked the idea of doing science fiction story that didn't seem to have any of the usual trappings of science fiction (although I love writing stories with all those trappings as well!).

In the end though the thing that kept me interested in the book was the friendship between Phil and Mark's clone, which felt very real to me, and I have a lot of fun writing Mark's clone, an intelligent, articulate boy who's only real probably is that he's unflinchingly honest about everything and assumes everybody around him is the same.

What else about your book might pique the reader’s interest?
It's quite a while since I wrote this now, but looking back I still love the way Mark's clone takes all the little rituals and unsaid rules that dominate teenage friendships and just picks them apart piece by piece.

For another Q&A I've done on Mark II, check out this interview at the Bluewater Waterstone's YA fiction blog

Now, over to the next, Next Big Thing.

Alexander Gordon Smith has turned up here before in our drunk author interview. Go and read about his Next Big Thing here.