#23 Robopocalypse: All Watched Over By Machines Who Want To Kill You 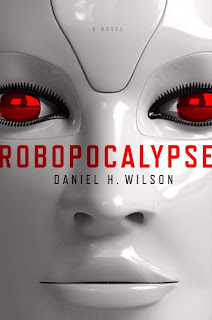 This month we’re going to be taking a look at some non-zombie related apocalypses. After all, I deliberately called this blog “Chris Writes About the End of the World” not “Chris Writes About Zombies” so that I had a get out clause in the event of zombie overload.
So, with zombie apocalypses off the board, let’s take a look at the next best thing: Daniel H. Wilson’s Robopocalypse.
A robot uprising differs from a zombie apocalypse in a lot of ways, but perhaps the most crucial one is plausibility. When the zombie apocalypse happens we don’t need to know how it happens, only how people react to it. The zombie apocalypse is the story of how humans respond in the face of an irrational and impossible event that flies in the face of everything we knew about the world.
A robot uprising is different however. The robot uprising is the culmination of advances in technology that are supposedly taking place right now, it is the logical extension of where our society is already heading.
A Brief History of You Getting Killed by Robots
So it is that previous robot apocalypses have been very much a reflection of current concerns. The very first robot uprising- in fact, the very first use of the word “Robot”-dates back to 1921, not all that long after an actual uprising had taken place. In R.U.R or Rossum’s Universal Robots, the robots are less mechanical men and more artificial humans, built as a slave race. It’s not hard to see why, not long after the Russian Revolution, people (by “people” here I mean “rich people”) would be scared by the idea of such an uprising. The robots here aren’t just a slave race, there the basis of an entire economy. They keep the factories working, the streets clean, and what’s more they’re doing tasks in your home. If they revolted, your society would collapse and your home would no longer be safe.

Skip forward a few decades to a better known robot apocalypse. This one, admittedly, takes place almost entirely off screen, with the entire battle being symbolised by a punch up between that space marine from Aliens, and that body builder from Jingle All The Way. 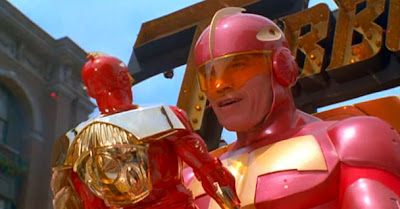 This time the rebellious robots weren’t our slave race of robofactory workers and robobabysitters. Instead, the rebellion came in the form of Skynet- a "Global Digital Defense Network" and given command over all computerised military hardware and systems. So, being a massive super-intelligent computer, it did what all massive super-intelligent computers do- became sentient and dropped nuclear bombs on everyone.


This film came out in 1984- Your guess is as good as mine as to why people in 1984 might have been scared of a vast, faceless machine killing us all with nuclear fire. Maybe it was a metaphor for fast food or disenfranchised youth.
My generation’s parents saw this video and thought “Hey! Let’s bring a child into this world!”
So while R.U.R’s robot apocalypse was a metaphor for poor people, and The Terminator’s nuclear Armageddon was a subtle metaphor for our fear of nuclear Armageddon, today the robot apocalypse is a metaphor for... well.
We live in an age where the army regularly deploys robotic drones. Remote controlled robotic drones, but they’re working on that, and occasionally they have been known to lose control go rogue. Meanwhile we have AI controlled cleaning robots and MIT has built a computer that can teach itself to read English, in order to learn how to play Civilisation- that game about taking over the world.

Aside from the scientists who seem to be actively working towards our own annihilation however, we’ve got the same anxieties about machines that monocle wearing factory owners at the start of the last century has about the proles. We rely on them, they keep our economy running, they’re telling us where to drive and they’re in our home. And they know us, everything we do, from shopping online, to using our bank cards, to wandering around with your smart phone in your pocket, is resulting in information being collected by us.

An Actual Review of the Book We’re Supposed to be Talking About
Spoilers from here onwards.


First things first- Robopocalypse does feature some similarities to Max Brooks’ World War Z, a story that some might think is more suited to this blog. Like World War Z, Robopocalypse is a novel by a writer who has previously written a How-To guide to surviving just that sort of event. Like World War Z, Robopocalypse starts its story in the aftermath of the war, then takes on the form of an oral history telling the story of the war from several different points of view. Whether or not Daniel H. Wilson was deliberately mimicking Max Brooks’ style, his book’s publicists certainly did. We at Chris Writes About the End of the World aren’t that bothered by this however, because as we’ve said before, all writers are thieving bastards.


What matters is, what does it do with the rip off?


With the robot apocalypse the writer has to think about how the robots look, how they’re designed, and, in its biggest departure from the zombie apocalypse, what the robots want. Most of these questions are ones that Wilson has good answers for. He’s the first to admit that if you’re trying to design the ultimate killing machine for a combat environment, you don’t base it on a shape that can’t survive a car crash without a seatbelt on.

There are humanoid robots in Wilson’s world, but it’s repeatedly pointed out that the only design advantage the human shape has for robots is that it’s better for interacting with humans. Far more useful are the gigantic preying mantis shaped robots, or the exploding insect-like stumpers. Think about that name for a second. Lovely.

The scariest portion of the book however, is the opening chapters that emphasise just how dependent we are on the machines that turn on us- from the robotic toys that start trying to blackmail a senator’s child in a sort of Satanic version of Toy Story (In fairness, a talking doll will always be more terrifying than anything that isn’t a talking doll) to the hacker who finds the phone and computer network he uses to screw with people turning on him, to the sheer chaos when an air traffic control computer just decides to crash planes into each other. Once the robots finally decide to just go nuts and kill everybody a survivor looks out his window to see what the robots have done to his New York Street. What he sees isn’t an image from a zombie apocalypse, or even a war zone- he sees a perfectly clean, well maintained street, because cities are environments designed to be convenient for machines to get around, and why would you screw with that?
One area where the book misses a trick is with its Afghanistan plotline, where a US soldier ends up fighting alongside Taliban insurgents for the justifiable reason that the Taliban have been fighting robots for years. Given that, like World War Z, this book makes a point of giving us protagonists from every conceivable age, race, nationality and background, I do wish that as well as giving us the US soldier as a PoV character the story had given a chapter or two over to an Afghani narrator fighting alongside him.
It’s also worth noting that, given that this is a story about mankind fighting machines, the book doesn’t take the easy and obvious anti-technology standpoint. Humankind wins the fight not by resorting to slingshots and bows and arrows, but by salvaging and repurposing robot technology, eventually even working alongside other robots that don’t fight for “Big Rob”.
And Big Rob himself is never painted as necessarily evil. Throughout the book he is curious about humans, as well as all other forms of animal life- it’s repeatedly pointed out how well the natural world seems to be doing once the humans are cut back. We never really learn exactly what his motives are, but whatever they are, they are complex.


I guess what I’m saying is that should a super-intelligent homicidal AI- maybe one that’s taught itself to learn English- be unleashed upon the Internet, I want to point out that I wouldn’t necessarily be against it, and could in fact be an extremely loyal and useful ally, totally willing to serve his probably completely benevolent dictatorship.


Right- the drinking game.
Do the characters spend most of the story under siege in some manner of building? One character does end up building a massive fortress for survivors to take shelter in, and many other fort-like outposts form throughout the book, so I’m going to let you take a shot.


Are the people coming to rescue you incompetent or more dangerous than the zombies? Is mankind the real monster? I’m actually going to go with no on this one. The Big Rob does seem to think humankind are fairly monstrous, but in terms of how they actually behave throughout the story, humans actually seem like a decent enough species.