This was a story I wrote for a Cabaret night at the Birdcage in Norwich. It is a story about a different kind of apocalypse, so I thought it would be in keeping with this month's non-zombie theme.
Ladies and gentleman, consider, if you will, the End of Days. There has been much talk recently of Biblical and Mayan prophecies, much debate over whether we will die at the hands of zombies, or robots, or, most recently, chimpanzees. But I am here tonight to tell you that the truth is far more startling, and more terrifying, then you could have possibly imagined.
Before I begin this tale, let me assure you that the facts presented here are 100% scientifically accurate. I know, because I looked them up on Google myself. So, if you're sitting comfortably, let me show you a glimpse of mankind's dark future...
It is the year 2036, and the world is a very different place. Meet Terry, at 25, Terry is one of the last people left who still remember the old world. The world of men. Now he’s a soldier- all surviving free humans are soldiers. Today he is crawling on his belly through the rubble of a destroyed office block, clutching his weapon to his side. The sun is setting behind the ruined crags of a once great city, and Terry, Terry is being hunted.
Still, Terry has been hunted his whole life, and nobody has caught him yet. Using stealth techniques learned from a lifetime of scavenging the wreckage of the old cities, he circles his enemy, keeps beyond the reach of its senses. Eventually, he’ll find a safe vantage point, and then the hunter will become the huntee.
He finds his spot, a still-standing concrete pillar that offers a clear line of sight to the enemy. It’ll mean leaving cover, but if he’s quick enough, it might just work. Terry risks a glance around the edge of the pillar. The enemy is there, watching with tiny black eyes. And it’s smiling. That’s the thing Terry hates most of all. The enemy is always smiling. 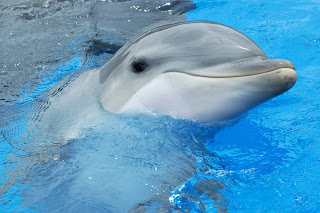 TRUE SCIENCE FACT: Dolphins are one of the only species known to kill for pleasure.
It was our own fault of course. We trained them. From the 1960s onwards the Soviet and US navies were known to be training dolphins to hunt out mines, and rumours abound that they were trained to plant them as well.
But that’s the thing about dolphins. They communicate. They spread the word.
The first anyone knew anything was wrong was the day that none of the tuna fleets returned to port. Not long after that the oil rigs started going down- the few survivors reported spectacular explosions that strangely managed to avert any spillages.
As we panicked over the looming energy crisis and bickered among ourselves, they struck. Nobody knows how they constructed the exo-skeletons- the strange fish bowls with mechanical limbs, armed to the teeth. Some theorised that the dolphins had evolved an advanced form of telekinesis. Others said they had crab slaves. By the time New York fell and Sheringham became a death camp, it was all academic anyway.
TRUE SCIENCE FACT: The ancestors of the dolphin had claws. As dolphins evolved they did away with the claws because they didn’t need them anymore.

Let’s return to Terry. He’s still hiding behind his pillar- the quick glimpse he stole was already a huge risk, and he doesn’t want to show himself again until he’s ready to strike.
Keeping out of sight, Terry arms his weapon.
Not long after the initial uprising, we discovered that bullets were useless against dolphin technology. For a while it looked like our cause was lost- some argued for a nuclear solution, but after the hijacking of Trident nobody wanted to risk escalating the conflict to that level.
Then, a brilliant engineer in the resistance realised we could breach the dolphin defences using a long, spear-like projectile fired with some manner of pressurised gas or spring. The ‘poon, as it became known, was soon our most valuable weapon.
Like all good soldiers, Terry loves his ‘poon. He keeps his ‘poon clean and in perfect working order, knowing that at any time the ‘poon could be his only hope.
Readying his ‘poon for action, Terry edges around his cover and takes aim. No sooner has he locked on than he notices an area of red lights dotted across his chest-plate. The dolphin’s echo-location spotted him the moment he broke cover. Terry dives for the ground as a rain of fire descends on him.
TRUE SCIENCE FACT: Based on the bodies of murdered porpoises and infant dolphins, it’s believed dolphins can use their echo-location to pinpoint the individual organs in a body.
Despite our near total defeat, even now the human race doesn’t face total extinction. Although merciless in their subjugation of our race, the dolphins seem to have a lingering affection for some of us. They have a particular affinity for pregnant females, and some children. These chosen few are given resplendent quarters and the best food rations, although they are regularly called before a court of their dolphin masters. Sometimes they are asked to perform tricks, other times the dolphins simply want their company. Some dolphins apparently find it “soothing” to swim with humans.
As for the rest, the adult males or anyone who the dolphins believe is overly grouchy, well, they are simply sent to processing camps. Humans go in, tins with smiling human faces on the labels come out. No human has yet deciphered the writing on the tins.
TRUE SCIENCE FACT: On average 37 people die a year from dolphin attacks. There are 60 reported shark attacks a year. It should be noted, sharks are not intelligent enough to cover up murders. 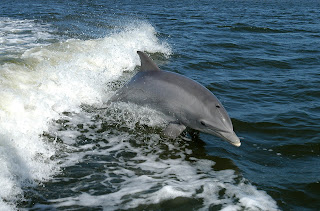 Terry is lying battered and bleeding in the dirt, but still alive. He’s lasted as long as he has after the dolphin apocalypse not just by being tough and being careful, he’s also made a habit of being incredibly lucky.
The dolphin is approaching now, one robotic step at a time. With every crunch of its feet against the rubble, there is a sloshing noise as the water rolls around its cockpit. The dolphin intends to find Terry’s body, and using its echo-location, determine whether his organs are still functioning.
Terry glances down, and realises his hand is still on his ‘poon. He heaves the gun into place, and takes aim. As the dolphin soldier steps into view, Terry fires the harpoon.
TRUE SCIENCE FACT: On the 28th of July 2011 thousands of dolphins were seen massing together over a five-mile area of sea, just off the coast of Cornwall.
Laughing, Terry clambers to his feet, and stumbles over to the body of his fallen nemesis. As he stands over the crumpled exo-skeleton, there is triumph on his face. Looking at his tiny, dark eyes, and the smile that stretches from ear to ear, you could be forgiven for wondering if maybe, just maybe, mankind is the real dolphin.
Suddenly, the smile vanishes. Terry can see the twisted metal, the shattered glass, the spilled water, but he can find no sign of the dolphin pilot. Behind him, he hears a whistling, clicking sound.
TRUE SCIENCE FACT: Nobody knows for certain that dolphins can’t levitate. 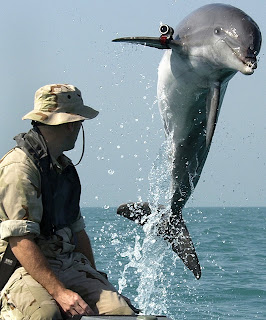