#20 Being A Zombie: Seeing How The Other Half Lives

Last time I was here I was telling you about prophecies of a global apocalypse due on May 21st. Once I had published this information, I disappeared for a while. I was off-the-grid, if you will. In the mean time, the world didn’t end. Are the two events connected? Was I, Chris Farnell, neglecting this blog because I was off on an incredibly daring and sexy mission to save the world?
I’m afraid I can’t possibly comment. All I’ll say is that ninja blood is a bitch to wash out.
Still, aside from events that may or may not have happened involving the infiltration of a subterranean blood temple, the discovery that various works of the Pre-Raphaelite Brotherhood combined under ultra-violet lighting actually reveal the blueprints for an ancient super weapon, and an eventual sword-fight in the bowels of an erupting volcano, I have also been taking a walk on the wild side. And by walk, I mean lurch. And by wild, I mean really actually quite sticky.
Yes, over the last two weeks I have found myself on two separate occasions walking amongst the walking dead. And today I shall share with you my insights from my Jane Goodall like adventure. 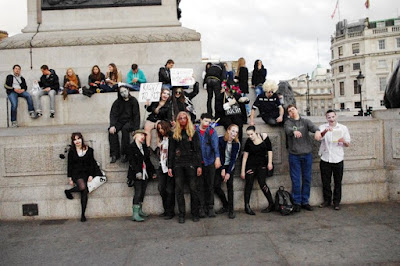 Zombification Number One: The Undead Uprising: Lurch For Zombie Rights
As regular readers will know, on the day of the wedding of Prince William to Kate Middleton, I asked my good friends Hannah Eiseman-Renyard and Amy Cutling to provide me with coverage of a Royal Zombie Flash mob- a protest/alternative celebration of the wedding. This rather backfired when the pair of them, and three other zombies, ended up being held in police cells for four hours.
This was many things, including A: Scary and B: Really, really stupid. The zombie arrestees are engaged in various actions to the illegal arrests.
Of course one of the responses to seeing people arrested just for wandering around London in fancy dress, perhaps the most sane and rational response to seeing someone arrested for wandering around London in fancy dress, is to get a bunch of people together to wander around London in fancy dress.
We did this. And I’ve got to admit, as I got off the tube at Leicester Square, I was pretty intimidated, seeing that huge mob of people with their wordless groaning and vacant eyes, ever on the cusp of some terrible violent act- because we had, perhaps foolishly, arranged our zombie protest lurch on the same day as the Champions League Final.
Perhaps because of this, and also the really quite appalling weather on the day, we ended up with a horde that was less close to the 92 people who’d signed up to the facebook event, and closer to, well actually, exactly 15 people. It should be pointed out that, according to our best estimates, this was almost double the people who were present at the actually zombie flash mob that the police felt the need to arrest people over.
Things I learned:
One: The first lesson I learned, in a pub toilet just before the event, is probably the same lesson that many small girls and first-time transvestites have already learned the hard way. When it comes to applying makeup, less is more. Wanting to be thoroughly unambiguous about undead nature, the white facepaint and fake blood were laid on pretty thick, so that my final appearance was a little more Heath Ledger’s joker than I originally intended. 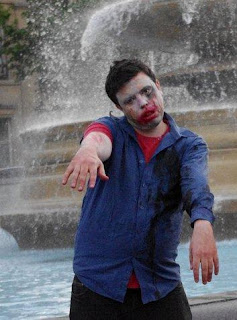 Also- fake blood tastes minty.
Two: In the event of a zombie apocalypse, we’re pretty much screwed. London doubly so. This is something I pretty much knew already- it’s what the films have told us. As we all just heard, my home city of Leicester has admitted it is completely unprepared for a zombie apocalypse, while the USA’s Centre for Disease Control has made a valiant effort to prepare its population by advising families to meet together at the mailbox outside their house.
In London, however, the problem was far worse. On seeing an approaching crowd of bloodied, groaning figures, the response of onlookers, both locals and tourists, was to point, laugh, and get their camera phones out.
If we had been anything like the flesh eating zombies of the movies, we’d have had them. Faced with such a combination of indifference, or good-humoured amusement, I find myself seriously doubting the original zombie flash mob’s real potential to breach the peace. 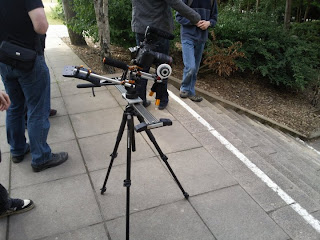 Zombification Number Two: The Shoot For Short Zombie Movie Sola Gratia
I got back from my adventures in London, and was ready to relax, satisfied that I had single-handedly put an end to police malpractice. That was until I got an email from Alexander Gordon Smith . Now Gordon is a writer of young adult fiction (Here the phrase “Young adult fiction” apparently means stuff too pants wettingly terrifying to be read by anyone over 21) and I’m sure that before long we’ll be telling you about The Fury- his young adult zombie novel that isn’t a zombie novel (It’s definitely a zombie novel).
However, when he’s not been trying to do permanent, irreparable damage to young minds, Gordon has been writing a short zombie movie (On set the director told me that it wasn’t really a zombie movie, which I think proves it is.)
Recognising me as someone with that magical combination of expertise and contacts, Gordon asked me to bring some zombies along to his film shoot. Cue an Ocean’s 11 style montage of me jet-setting around the world (Well, Norwich) using a combination of blackmail, called in favours and sheer charisma to assemble a crack horde of four people. Including me. Fortunately Gordon had brought a few other of the undead along with him.
Among the zombies I’d brought along were Matt and Alina, from my zombie LARP adventure, and our blog’s regular butt monkey, Tom Harvey.
Were we required the play dual roles of “zombie” and “crowd member”. We really got into the role, while me and Tom were playing the part of “two people queuing for a cash machine” we were so convincing that two other people actually started queuing behind us. I think it’s because we were so method.
Things I Learned
One: Being a zombie is really, really sticky. We were pretty well covered in fake blood and it was a sunny day, and I swear by the end you hear a crackling sound if I tried separating my fingers.
Also, bizarrely, the fake blood smelled of mint again. By the end of the day, peeling the thin layers of congealed gore off my hands was getting so addictive I was starting to worry there wouldn’t be any gore left on me for the final shoot- and that’s before I discovered you could peel really long strips off the blood on Tom’s neck, at which point things got sort of horribly homo-erotic.
Two: Being a zombie involves a lot of standing around. In the movies, if there are ever zombies on screen, they’re usually groaning and lurching towards the still-living protagonists. Even the slow moving zombies always seem very into it. Now I know why- when the humans aren’t around, what do the zombies have to do? During the filming of this short there was a lot of waiting around between takes, so I feel like I have a pretty good idea now. There is a lot of standing around- mixed in with the occasional bit of weirdly homo-erotic skin peeling.
Three: Police brutality isn’t all bad. Like I said, there was a lot of waiting around between takes. Having been to the zombie protest lurch the previous week, I was sure a lot of my readers would be looking forward to hearing my account of that, possibly with some reports of more arrests or maybe even a bit of police brutality. Sadly, I didn’t witness any. So when I ran into two of the actors for this film playing police officers, I asked them to do a little favour for me.
Now, it’s been a while, so I’m sure you’re all waiting for a long awaited round of the Chris Writes About The End Of The World Drinking Game. Here goes:

Do the characters spend most of the story under siege in some manner of building? Nah, we wandered around a lot.
Are the people coming to rescue you incompetent or more dangerous than the zombies?
Yes, but only when I asked them nicely. Two shots.
Is mankind the real monster? Nah. Mankind likes pointing and laughing and taking photos with its phone. Nothing particularly monstrous about that.
Are the zombies walking dead who move slowly and can only be killed by destroying the brain? A zombie protest sprint would have been way too much effort, and both incidents of zombying up ended in the pub, where brains were promptly destroyed. Three shots.
Kiddy zombies?
And they were adorable!
We will back with our more regular blog next week. Until then, never stop kicking Tom.