#17: The Royal Wedding Zombie Flash Mob: Breach of the Peace (of the Dead)

This is part of a special two part blog. For the story on what happened at the Royal Wedding Zombie Flash Mob, keep reading. For an exclusive blog from Amy Cutler, something of a zombie expert and one of the zombies arrested at the event, and her views on just how the zombie genre is able to critique these events, click here. UPDATE: For a recent interview with Hannah, on how life's been for her after the arrest, and what she and others are planning to do about it, click here. 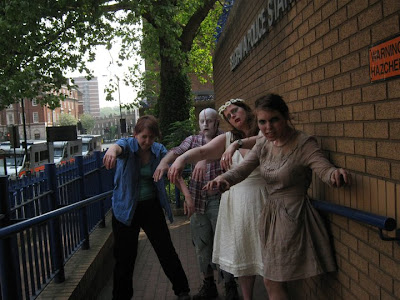 This was going to be a very silly blog. A combination of geeks, hippies and protesters had decided to mark the Royal Wedding of Will and Kate by having a picnic dressed up as zombies- some thought it was a political protest, some just thought it would be funny. We’ve done movies, books, TV, videogames, the Bible and Live Action Role Play on this site, so reviewing a zombie wedding party seemed like it would fill up our personal bingo card and maybe even rank high in google. To this end, unable to get to London myself, I asked Hannah Eiseman-Renyard and Amy Cutler to go and get photos and quotes for what I thought would be a bit of fun.


Then Hannah phoned me from the police station.


But let’s back track. A few days before the Royal Wedding of Will and Kate, of which we were all so pleased, I came across the hashtag #RoyalZombieFlashMob, which led me to this: 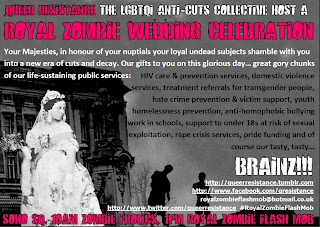 As you can see the invite listed various causes they wanted to raise awareness of, and had a tone that was irreverent but barely even counts as disrespectful. Seeing how this could make a silly piece for the blog, I recruited Hannah Eiseman Renyard, boss editor king of Whippersnapper Press, and Amy Cutler, who regular readers might remember as the zombie expert in our blog a few weeks back, and asked if they’d be up for popping along, taking some photos and giving me a bit of write up.

On the morning of the event Hannah headed out dressed like so:

While she was off having fun, I was stuck following events through twitter (Yes, Chris Writes About the End of the World finally has its own twitter feed @Chriszombieblog, we are at the cutting edge of 2006):


Around this time I saw other, slightly more menacing tweets about arrests and police vans, and heard some of the organisers had been arrested for having a mock guillotine. I retweeted, and whaggishly posted:

@chriszombieblog
Nobody tell @Hannah_Chutzpah - I'll never hear the end of it if she gets arrested. #RoyalZombieFlashMob

Then to be on the safe side texted Hannah and Amy to let them know arrests had happened, because I’m not a total bastard. Amy texted back “Should I abstain from putting blood on the flag? Is there a law against it do you think?”
Oh how we laughed.

In her account of the day, Hannah described the “Mob” itself as:
Within Soho Square there were maybe twelve people there for the demo – one dressed as a crusader with a colander on his head, a couple of people with crowns made out of gold paper and everyone else dressed in pretty normal, boring clothes. Three film crews were milling about, bored, more photographers and journalists milling about, and a pretty obvious police presence. I decided to hang well back and stayed on the other side of the square to where anyone else was.

I heard a few chants of “one solution: revolution!”

Journalists kept approaching trying to interview me about my aims and objectives as I was pretty much the only one who looked like a zombie. I was a bit embarrassed, given that I’d come to report on it too and had no idea about aims or anything else – I just happened to have dressed up. I explained I was mainly there to report on it too. Lots of people took my picture. I couldn’t really find anyone to speak to myself. Apparently I was the story. Whoops.

It was a damp squib. It’s possibly, but not conclusively, because three of the main organisers had been arrested the previous day.

Left to their own devices, this would be a blog where my main joke would have been contrasting the gathering with this googlemaps simulation of a royal wedding zombie outbreak.

"We were fairly inoffensive members of the undead, who ate some homemade ‘brainnnsss’ cake earlier in the day, and travelled on to Starbucks where we sat down with some tea. At this point, four police vans (with sirens!) came round the corner and did a raid on Starbucks. We were stopped and searched under a special Section 60 for the wedding day – by sixteen police men, although there were only five zombies – and finally arrested and transported to the police station."

This is perhaps the most ridiculous part of this whole day. Sixteen police officers to arrest five zombies, when everybody knows that zombies can’t run.

The zombies were arrested for “A potential breach of the peace” and were kept in a police cell up to pretty much the exact moment Will and Kate drove out of Buckingham palace past a huge baying horde that looked like a far more evocative image of a zombie apocalypse than anything some fake blood could muster.

The Royal Zombie Flash Mob was a very, very silly event. Some people there might have thought they were overthrowing the government, some people were trying to raise awareness about important issues, some simply thought dressing up as a zombie equals funny. It doesn’t matter a huge amount if you agree with their politics, or how effective you think dressing up as a zombie is as an agent of political change.

Because the silly stuff is important, it’s where we have to draw the line. The difference between the right to put on some gory make up and make a pratt of yourself in public, and the right to criticise the government and stand up for the rights we’re supposed to hold sacred, is haggling.
There’s plenty more to this story. You can hear the zombie’s accounts of the arrests from their interviews with Mary Hamilton- one of the brains behind the Zombie LARP, who knows a thing or two about pretending to be a zombie. Here’s an interview with Hannah as well as Amy and the other zombies. You can see a zombie nun chatting to a police officer and you can watch the police evicting the remaining zombies from the park.

Read about it on the Guardian, with a photo of Amy Cutler getting escorted away in handcuffs and seven and a half minutes into this video, you can see the arrest itself.

And now, I know our regular readers will be gasping for our drinking game.

Do the characters spend most of the story under siege in some manner of building? Well, I don’t know, does Soho Park count? I’ll leave that one to your discretion.

Are the people coming to rescue you incompetent or more dangerous than the zombies? The police are technically there to protect the people they were arresting, so take two shots.
Is mankind the real monster? And another one for this.

Has anybody said “They’re coming to get you Barbra!” Probably, I reckon. If the protesters didn’t, they should have!

Are the zombies walking dead who move slowly and can only be killed by destroying the brain? Well, the zombies were going to Starbucks- they were clearly pretty sedantry. One shot. 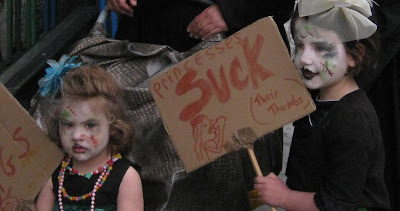 Do the dead rise regardless of whether they were “infected”?  Well, zombies have been spotted in Brighton and London today, and with Amy looking into arranging a protest lurch- email Amy here if you're interested in taking part- I think it’s fair to say they’ll rise.