It’s hot. Skin meltingly, eye-searingly, hot. While all sane people are moaning about this and complaining that they have to do anything except lie naked in a bath full of ice, there’s always a few smug people who say “It’s nice to get a bit of sun! It’s no big deal! It’s not the end of the world!” These people somehow think that being soaked in the radiation of a gigantic ball of nuclear fire is somehow okay just because it’s there every day. Well those sun drenched fools are wrong, and these stories prove it!
Just A Pilgrim 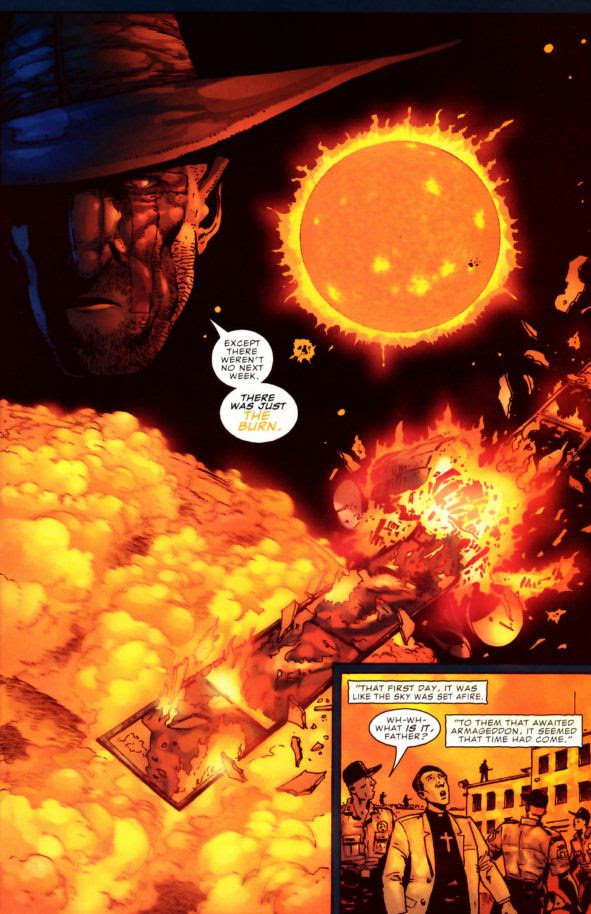 This story about a mad missionary walking a post-apocalyptic Earth takes place in a world where the sun has expanded and the planet has been singed to a crisp. Cities have burned and the seas have boiled away, while survivors scrabble about on the dusty ocean floor. The only greenery to be found here is at the bottom of the Marianas Trench.
The Midnight Sun
One of the bleakest episodes of The Twilight Zone (a series not afraid of going extremely bleak when it’s in the mood). The Earth has come off its axis and is drifting closer and closer towards the sun, resulting in a deadly heat for the people that live there.
There’s no adventure here, no hope, just a woman alone in a flat while the world melts around her. You can probably relate.
Doctor Who 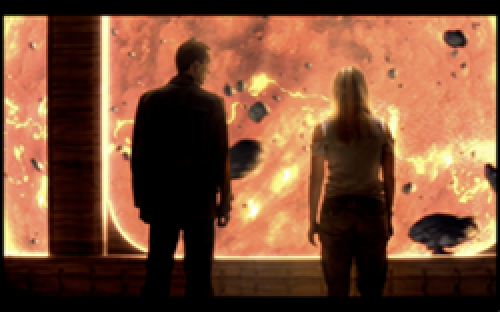 The world has ended twice in Doctor Who, and both times it was for the same reason. The first time is in The Ark, in which the TARDIS lands on a generation ship fleeing an Earth that is falling into the sun, and the second time is in The End of the World, when the sun finally expands and blows the Earth to smithereens.
Even before then though, the sun has had it in for the planet. The Ark in Space (not to be confused with The Ark), The Sontaran Experiment and much later, The Beast Below, all depict a future where mankind has had to flee the planet to avoid solar flares.
The Day the Earth Caught Fire

In this 1961 movie it’s a nuclear blast that sends us hurtling towards the fun, with orange infused footage going somewhere to make the film feel as hot and sweaty as, y’know, reality is right now. It being the sixties they decide that the solution to the problems created by all these nuclear bombs is more nuclear bombs, but by the end of the film we never find out if the Earth is saved or doomed (although it has to be said, very few storytellers leave the ending ambiguous when they intended for something really good to have happened).
Solar Crisis

A film I originally only knew about thanks to a trailer on the Super Mario Bros. VHS that I owned, because I liked the film. There, I said it. The plan is pretty much identical to that of Sunshine (which doesn’t make the list because the sun is going cold in that one) – go to the sun and drop enough nukes on it that a solar flare will point away from the planet.
Knowing

I’ve not seen this yet, but one day I plan to make it part of a Nicholas Cage apocalyptic double bill with Left Behind. A kid can predict the future. The future is a solar flare going to roast the planet. That’s all I know about this one. I bet Nicholas Cage is great in it though.


Chris Farnell is the author of Dirty Work and Mark II. He is writing this blog as a terribly exploitative way of drawing your attention to the newly released timetable for the Apocalypse track at this year’s Nine Worlds Geekfest, where there will be panels discussing post-apocalyptic survival, zombies, and how useful our stories are going to be when an actual apocalypse hits. Come along and bring plenty of sun cream.
Posted by Chrisfarnell at 04:15