Last night I finished Bioshock Infinite. Then I went and ate a pizza and had a long sit down because frankly, I was over-stimulated like an angry toddler and needed to calm down before nap-time.

Oh, and after the very next line break I am going to start raining down a hellfire of spoilers which you do not want to read unless you’ve played the game yet. Seriously, this is a great game but it’s also a game you don’t want to have spoiled, so off you fuck. Oh, and for good measure I’m probably going to spoil the movie Trance, although to be honest that’s less of a tragedy.

Okay, is everybody left? Yeah? That guy at the back? Are you cool? Good, I thought you were but I just wanted to check. 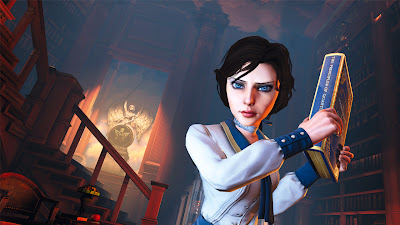 I really hope we can be done with the tired old “Are videogames art?” thing now. This week I enjoyed two pieces of media content that dealt with the unreliability of your own memories and ended with a gigantic mind fuck where someone’s memories weren’t what they thought they were and the hero of your story turned out to be something else entirely. One was Trance, which stayed with me the entire length of the walk from my seat in the cinema to the first set of traffic lights I passed on my way home, where I parted ways with the friends I’d been seeing it with. The other was Bioshock Infinite, which I can already tell is going to stay with me for a good while longer. Does it affect you as much as say, the Mona Lisa, Mice and Men, or Citizen Kane? Well I don’t know how much any of those three things affected you, it turns out that stuff’s subjective, but if you can technically describe Deuce Bigelow: European Gigolo as art, then this game passes all the tests by a mile.

But I’m not writing this to add to the white water rapids of gushing reviews that have already been written about Bioshock Infinite, if you’re reading this I assume you’ve played the game, so you know it’s good.

No, I wrote this to talk of one of the few criticisms about the game that have come about (always prefaced by more gushing about what a great game it is). Some have been saying that the game is too violent, and this time it’s not Keith Vaz or Tipper Gore. It’s Kirk Hamilton and Kotaku, and Cliff Bleszinski, one of the videogame designers behind Gears of War who happily describes himself as “the guy that brought you a chainsaw gun”. The argument that both people make is that Bioshock Infinite is such a masterpiece of world building, story and character that it detracts from that to have spend so much of the game slamming a set of spinning fishhooks into people’s faces and proving right PC Danny Butterman’s theory that there's a point on a man's head where if you shoot it, it will blow up.

I empathise. When I first sat down to play the game last week, after a while I tweeted this:

So far playing BioShock Infinite, I can't help but worry that the game will be ruined if I have to start actually fighting people.
— Chris Farnell (@thebrainofchris) March 29, 2013

And the fact that gamers and game designers are asking these questions and expecting more from games is a good thing, and I hope that the nuanced, character-driven game that uses mechanics other than violence to move the plot forward comes along soon – assuming you believe we don’t already have it in games like Grim Fandango, or Portal, or Fallout 3 which I played through mostly by talking my way out of problems or running away (although personally, while these are all great games none of them quite delivered the gut punches that Bioshock Infinite was dolling out).

However, on this one case I believe they’re wrong, that the violence in Bioshock Infinite is a core part of the story, not just an add-on that’s there because you need shooting to break up the plot.

Yes, if this development of this game was anything like the last one, the fact that it was a shooter probably came before the plot about sky racists, time travel and dimension hopping. The original Bioshock was set on a tropical island full of genetically modified Nazis before it was set in Ayn Rand’s extremely wet dream (do you see what I did there?), and a lot of the gameplay mechanics had been nailed down long before there was a story. However, the story they ended up with in Bioshock Infinite was a story that embraced the fact it was built around a violent gameplay mechanic.

I’ve talked before about how zombie movies aren’t just violent, they’re about violence, and to certain extent the same is true here. When Booker and Elizabeth walk into a ticket office, only for Booker to end up murdering everybody in there, Elizabeth is terrified and disgusted. Throughout the game we are given reminders of the terrible things that Booker has done, at the battle of Wounded Knee and as a Pinkerton. We see Elizabeth go from being horrified at the violence Booker commits, to accepting it as a necessary evil, to performing her first murder and eventually leading a brutal attack on the city of New York.

By the end of the game we discover that everything that happens, from Elizabeth’s imprisonment to the city of Columbia itself are all consequences of Booker’s attempts to escape his violent past. In one world he escapes it by drinking too much and getting into gambling debts, in another world he does it by becoming born again as Zachary Comstock, and building a floating city capable of an even greater scale of violence and genocide.

Which is all very well, but that’s back story. Why does Booker have to be ‘sploding heads left right and centre in game?

Because, while in films and books the rule is always “Show don’t tell” in games you learn by doing. In the original Bioshock the fact that you’re a brainwashed slave has emotional punch because you realise that it’s you who has been blindly following instructions since the game started. When you arrive at the scene of Booker/Zachary’s baptism at the end of the game, you don’t need to be told that it all seems weirdly familiar, because you’re already getting déjà vu from the baptism at the beginning of the game.

So if you’re playing a violent character it’s not enough to know that he did violent things, you need to see that violence, and perform that violence yourself, and see how others react to it. When you discover that in another life your character razes cities to the ground, it’s made more believable knowing the trail of bodies that brought you to that point.

There are some great stories that can be told with games that don’t need any violence at all. But this story was about a violent man, and it’s no worse for it.
Posted by Chrisfarnell at 02:42