Hello! Today we’re going to be getting all cultural at Chris Writes About The End Of The World, looking at an adaptation of a play by William Shakespeare (Who you’ll know of as that guy who appeared in Doctor Who that one time. It was the episode with the witch aliens in it).

A theatre company in London has taken the play Macbeth and put on a version of it set in post-apocalyptic Haiti.

Now, I don’t ask much of my readers because, quite frankly, you’re all pretty obstinate and a unhelpful, but I would ask that you all go and see this play, so that it’s a huge success and they put it on again at a time when I can come and see it.

In the mean time, here’s an interview I had with Georgina Sowerby, who directed the play:

So, before we start, without giving away too many spoilers could you explain what this play's about?
This version is about a bunch of women who've survived a massive disaster and created a new colony on a strange island. One of them, La'Beth/MacBeth has secret fantasies about being in charge, so she and her girlfriend murder Du'Cann/Duncan - the woman who rescued and set up the colony in the first place. Bad Move.

A few men have survived in the surrounding jungle-, They were soldiers who committed terrible acts of violence and have since gone feral taking on the magical properties of the forest. La'Beth/MacBeth goes to visit them, partakes of their mystical poisons, has hallucinations and visions of her future. They seem to promise power and she becomes a killing machine. But beware fortune tellers is all I can say!! 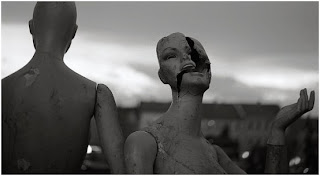 I understand that the play is a reboot of an older play set in medieval Scotland. What was it about medieval Scotland that made you think of post-apocalyptic Haiti?
The Scotland the play was written about was a country of violent tribes all vying for power. The original King MacBeth had power for a fair few years - normally you'd get horribly murdered way before that! Also, in the play, a mix of Christian and pagan religions abounds and nature/fate overtakes all best attempts for humans to control their lives.


My initial motivation was to set it in a place that has a history of suffering turmoil and experienced a mixture of military violence and lawlessness, natural disaster. Also to find a place with a fusion of very potent religions and that's an island containing a great mix of cultures .. Some of our key actors have Afro-Carribbean routes and I was interested in playing around with accents and dialects.

Finally... Zombies. There's a massive theme of possession in the play and there's an interesting thought that zombie stories appear in countries/cultures that have been colonised - where the soul of the people has been abused and stolen from them..

In the original play virtually all the characters were male, save Macbeth's wife and three "weird sisters". In your version you say the cast is all female apart from the "weird brothers". Does that include Lady Macbeth- Is Macbeth a lesbian in this version? Whether or not she is- Why did you decide to make these changes? Is it because political correctness is finally, after all this time, going mad?
The play is super macho - its all about maleness and shame and violence and not being a girl.. the only girls are outsider freaks (witches), an ambitious woman who commits suicide (don't get too ambitious girls!), and a pissed off wife who gets murdered (just stop nagging for christ's sake)... Its interesting to hear all this misogyny now coming out of womens' mouths... And yeh, there's a couple of lesbian angles going on in it - some of the characters would have been gay before the disaster and some of them have been thrown on each other, so to speak.. But mostly I wanted to build this idea of a tight community and the risk maccers takes in wrecking it.


Given the changes you've made to the setting and the characters, have you had to make any changes to the actual text? Will this be a verbatim version of Shakespeare's play, or have you had to make a few rewrites?
We've rewritten some of it - We worked with this amazing writer called Brenda Garrick who's parents are from the Domenican Republic and she's redone all the witches stuff and a bit of the Porter.. I'd have her do more because its brilliant and so lively! But for that we need to raise more funds: its a hell of a lot of work! Plus I changed all the 'he's' to 'she's' and some of the character titles ('sir' becomes 'girl' or 'sis' - 'kinsman' becomes 'woman' - 'lord' becomes 'love' etc) I think it really works - purists will turn in their graves... or walk out of the auditoreum.. Shakespeare however, won't give a shit!!!

Tell us a bit about your cast. Are they all prima donnas who insist on elaborate riders for their dressing rooms? Any huge clashing egos during rehearsals?
There are big egos but they are very motivated by the project. Plus we've worked hard to create an environment which is creative and supportive. It helps having a few males I must say (something about donkeys in the stable;-)?) We do have the fabulous Nikki Kelly who played Sylvia in Hi-di-Hi as our porter. She is very game and a one-off - she's given us some good laughs and laughter is very very important when you're messing with a monster of a play like this!

What's been the highlight of putting the play together?
Seeing something I thought I knew in a totally fresh and dynamic way - thinking things just couldn't work and being surprised when they did. Also seeing Nikki Kelly going into full splits and ripping the arse out of her trousers will remain with me for the rest of time.


And the biggest challenge?
The bloody short time frame!

Finally, let's assume La Beth 2012 is a massive critical and financial success, to the point where you get completely typecast and are only allowed to make sci-fi retellings of Shakespeare plays. What play would you do next, and where would you set it?
I am quite obsessed by having dead characters walk on stage, emerge from under the earth, crawl out of suitcases (see some photos on my website www.dirtymarket.co.uk). Maybe A Midsummer Nights Dream where the lovers fall down rabbit holes and go underground when they get lost in the forest - kinda Pan's Labyrinth style lost amongst the roots of trees... maybe keep with Blighty this time but create a site-specific event where we take the audience under the earth. Anyone know of any potential locations? You got me thinking now!


And one more question (I lied about the finally). As a rule we ask everyone we interview what their zombie survival plan is- so what is it?
This is my single motivating factor for learning to drive.(*books BSM*) Wait a minute aren't they already here? Marxist revolution - start with Cameron/Landsley and Osbourne...  I'm sharpening heavy instruments...  Hang on, how do i know you're not one of them?- I shouldn't be telling you this - now you know my plan... there's someone at the door... aaaaaaarrrrrrrghgghghghghghghghghghghg...

La'Beth is on at the John Lyon Theatre from March 29th to March 31st, you can see their blog here. You can also follow them on twitter.
Posted by Chrisfarnell at 02:21